Can you believe it’s the end of January already? The day light hours are getting longer here, we’re up to over nine hours between sunrise and sunset. I know that doesn’t sound like a super feat, but when you consider in the dead of winter we only get seven hours and thirty-four minutes of daylight, it is something to celebrate.

For a mini-celebration I fixed a chicken dish, Chicken with Peppers, Tomatoes and Onions, that was really yummy. I can’t sew a straight line, but I can cook. I sautéed the chicken breasts in olive oil and white wine, added sliced onions and a can of drained diced tomatoes to cook the onions until tender. I added garlic, parsley, oregano, basil, salt and pepper. After the chicken and onions were almost done I added sliced bell peppers, red, yellow and orange, and a half cup of sun-dried tomatoes and continued to cook until the peppers were tender. It looked amazing and tasted that good too.

For the wine, I opened a bottle of an Italian red wine that was a gift for Christmas. The wine, Sant Andrea Riflessi was a dark red color in the glass almost opaque and I could smell cherries and blackberries when I stuck my nose in the glass. The wine was dry and soft in the mouth. There was no harsh bite, just a lush smooth liquid. I could taste a bit of wood, dried fruit and tobacco. The wine was a 2015 vintage and had an alcohol content of 12.5%. 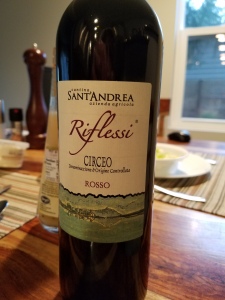